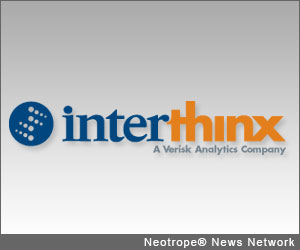 AGOURA HILLS, Calif. /California Newswire/ — Interthinx, a Verisk Analytics, Inc. (NASDAQ:VRSK) subsidiary, and a leading provider of comprehensive risk mitigation solutions for the financial services industry, has released its annual Mortgage Fraud Risk Report, a report covering data and trends based on analysis of loan applications processed in 2012 by the Interthinx FraudGUARD(R) system.

According to the yearly report, the 2012 Annual Mortgage Fraud Risk Index is 150, a 3.4 percent increase from 2011's index of 145. This increase reflects the overall rising trend in mortgage fraud risk observed over the past two years and is attributed to market stabilization, tightening housing inventory, and home price increases.

The report also found a marked shift in mortgage fraud risk from west to east, with seven of the top ten states located in the eastern half of the United States. Hit hard by mortgage fraud and foreclosures early in the boom years, many of these states are judicial foreclosure states where real estate sales activity was depressed before the "robo-signing" foreclosure abuse lawsuit was settled. The rise in fraud risk is an indicator that these markets may have hit a true bottom, since rising markets are more attractive to fraudsters seeking profits, and fraud is easier to commit when property values are increasing than when they are decreasing.

More detailed points highlighted by Interthinx analysts include the following:

* Despite the decrease in fraud risk in the western United States, Nevada and Arizona – perennial entrants in the top five – are ranked as the first and third riskiest, respectively. California dropped to sixth place – its first time finishing out of the top five since the inception of the yearly report in 2010 – even though it contains eight of the riskiest Metropolitan Statistical Areas (MSAs) for Employment/Income Fraud Risk, six of the riskiest MSAs overall, and five of the 25 riskiest ZIP codes.

* Employment/Income Fraud Risk is up 7 percent nationally from 2011 and is particularly concentrated in northern California, while Occupancy Fraud Risk declined 11 percent from one year ago, likely reflecting investors' ability to use cash for purchases. Despite the decline in Occupancy Fraud Risk, investor loans remained significantly riskier than owner-occupied and second-home loans.

* Purchase loan applications with loan-to-value ratios (LTVs) of exactly 20 percent are extremely risky with a Mortgage Fraud Risk Index of 637. It is likely that these loans are associated with piggyback type loans where the borrower originates a loan with an LTV of 20 percent for simultaneous use as the down payment for a loan with a second lender for 80 percent of the property value.

The full report is available at http://www.bit.ly/16zgrWu .