SAN DIEGO, Calif. /California Newswire/ — Excited about baseball season, but still longing for your football fix? Mark your calendar for May 2nd and 3rd as Flag Football Magazine, aka FlagMag.com, brings their 10th annual World Cup of Flag Football to sunny, San Diego, California. For the past decade flag football teams from around the world, including Austria, Venezuela, and Japan, have gathered to determine ultimate bragging rights on the gridiron. Last year’s Costa Rica event saw Team USA overcome a 0-3 start to ultimately defeat Team Mexico in the men’s title game. 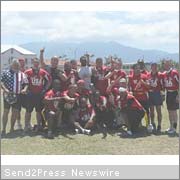 This year’s event is open to all players with men, women, youth, and co-ed divisions available. Initial seeding is based on regional qualifying tournaments; however qualifying for an event is not a requirement to participate. All teams will be appropriately seeded in the final Sunday tournament based on seeding rounds Friday and Saturday (to accommodate local teams with previous league commitments, teams can select their preferred day to play). Individuals are encouraged to participate as well and will be place on a team with other individuals.

Team fees are $445 for 7/8-Man and $245 for 4/5-Man. Plus, as event organizer, FlagMag has created some wonderful event packages for players, including lodging, parties and, of course, the tournament. Affordable hotel pricing starts at just $159 per person which includes the required $75 players pass for the tournament. Additional package details and registration information can be found on the FlagMag web site under Tournaments.

FlagMag.com was created in 1998 as an online resource for flag football players around the globe to obtain up-to-date information on tournaments, events and leagues. FlagMag was originally launched in support of a quarterly magazine sent to players in the USA as well as affiliates in Canada, Mexico, South America and Europe, however as the business evolved the magazine went on hiatus. In 2009 FlagMag was redesigned to take better advantage of the current online social media landscape.