LOS ANGELES, Calif. /California Newswire/ — The only known church Joe Rogan attended as an adult suddenly experienced censorship after he posted a Freedom video to Twitter. “Joe was at the physical Temple twice before attending the very first service with Eddie Bravo and Kevin Booth,” said founder Craig X Rubin. “Having only 23 followers on YouTube we didn’t expect to be censored. We’re not sure if it has something to do with us mentioning Joe, or just a sign of the times.” 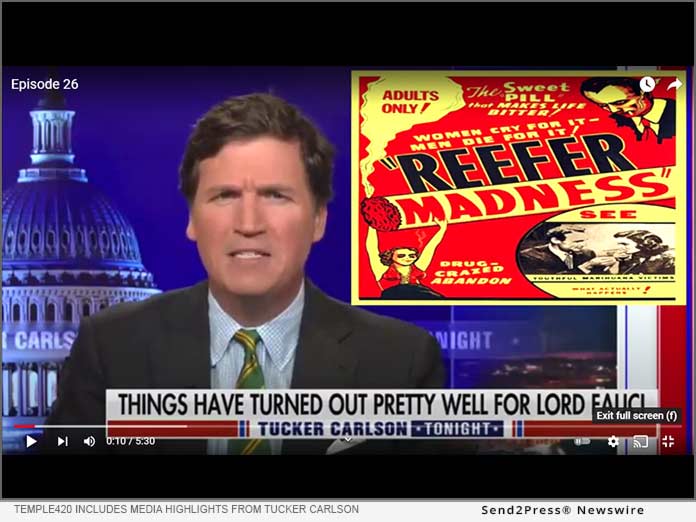 Once, 15 years ago, Temple420.org was the fastest growing religious institution in the United States, yet when they were shut down not one group stood up to defend their rights despite Rubin pleading for help. “I explained that if others wouldn’t help us that eventually their churches would be shut down too, which recently happened during the pandemic. Now, it seems that Joe Rogan is one of the few voices screaming for freedom in America.”

“I am proud that such a leader for freedom attended my first ever sermon,” finished Rubin. “I am not saying anything that others are not saying.” Yet Temple420org is being censored. “I think if you can’t buy or sell without permission that is the Biblical Mark of the Beast. Watching Mark Dice videos on YouTube is scary. Why are they censoring our temple?”

In 2006, a long-time pot activist, actor and recent Jewish convert to Christianity opened America’s first pro-cannabis church in the US mainland, Temple 420. It was featured in films and magazines globally. Two weeks after opening a physical location Rubin was arrested but refused to stop practicing his religion that included selling medical cannabis. The police refused to arrest him again and the judge did not revoke his bail despite Temple 420 being, “featured on the front page of the newspaper,” according to the prosecutor and the newspaper he held up in court.

The landlord was threatened, “Evict the Temple or lose your property,” according to Rubin, known for selling bongs to Brad Pitt. He was eventually given nearly 20 years for selling 3 grams of marijuana to an undercover police officer who was legally able to use medical marijuana. “During the two weeks we were actually legally open our church was visited by many celebrities.”

Rubin hinted that Hollywood attention may have led to the church being closed, “Within the first two weeks of being open A-lister, Esai Morales, attended a wedding. Doug Benson filmed ‘Super High Me.’ Eva Longoria, Ahmed Ahmed, Ron Jeremy and other B-rated celebs popped in too, probably because of our location on Hollywood’s Walk of Fame.”

Rubin spoke about the justice system, “I had to carry papers at all times just like now with vaccine passports. Years of prison and probation, which in my opinion is a violation of the 8th Amendment. I was not allowed to mention at trial the Bible, the Constitution, medical marijuana or pretty much anything.”

After receiving permission from the judge to reopen, the Temple was shut down in less than a week. All charges were dropped; however, 2 years were added to Rubin’s probation. The City of Los Angeles seized the pastor’s life’s savings for second time and his location passed to another medical marijuana club after he had spent 6 months fixing it up.

“This time (2021) we decided to only do a 7-week online ministry hoping to not be arrested.” Now, hemp is legal there is less chance of that occurring, Rubin continued, “Marijuana/hemp cannabis is legal in California, but now Christian values are being censored. Temple 420’s Operations Manager had his house raided in the middle of the night under questionable circumstances. We must be saying the truth, or they would not be attacking us.”

GQ magazine and others reported on the Temple before the arrest. Few media personalities mentioned Temple 420 after the arrest or trial. Glenn Beck had Craig as a guest on CNN the day he was convicted. Alex Jones had him on Infowars to discuss, “How Weed Won the West.” Mancow had the Bible teacher on his show, as did Heidi and Frank to discuss, “the bust.”

Greg Gutfeld poked fun of the cannabis church on Fox News after the arrest. “No one watched his show at the time,” said Rubin, “but I did. It hurt when he made fun of me. I met the comedian who was a guest on Gutfeld the following week. I have been simultaneously upset with Gutfeld and wanting to be on his show ever since. You would think religious media would have covered our church, but no, only one, Brad Greenberg. Not one Christian station reached out.”

Social Media Campaign Promotes the Importance of Grasslands in the Americas