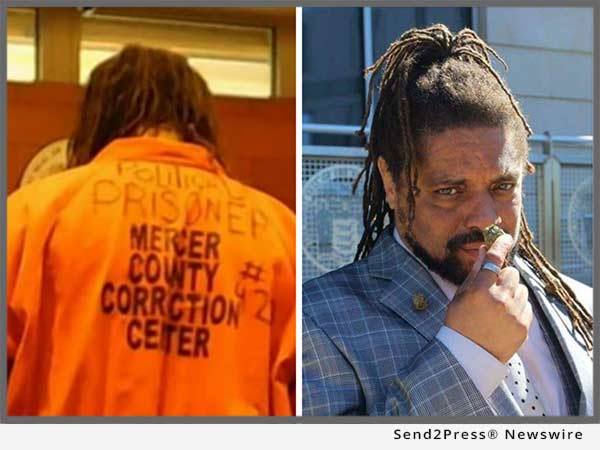 TRENTON, N.J., Jun 21, 2017 (SEND2PRESS NEWSWIRE) — Is orange the new green? Cannabis activist, cancer patient and self-proclaimed “Superhero of the Potheads” Ed Forchion aka “NJ Weedman” might well be pondering this dilemma as he sits out his “Hunger Strike for Bail” protest in New Jersey’s Mercer County Jail.

The free speech activist was originally incarcerated on March 3, 2017 and is being held without bail on charges of witness tampering. Forchion has since filed a Federal Writ of Habeas Corpus in U.S. Federal District Court of Trenton New Jersey (Case No. 317CV02669PGS) claiming a tragic violation of his civil rights under New Jersey’s new bail reform laws. Forchion has gone without food for over 11 days.

The charges were filed after Forchion, per the approval of his former attorney, posted the name and photo of a police informant on his Facebook page, requesting the public to help him find information on the man. Forchion believed the individual was a paid informant, hired by the Trenton Police, to build a drug case against him. Under New Jersey’s new bail reform laws, which went into effect January 1, officials cite that certain conditions can warrant pre-trial detention, like danger to the community, flight risk or threat to a witness.

“I am a peaceful, proud and patriotic pothead,” cites Forchion. “Yet I have sat here for over 100 days in a cell while watching real criminals, like murderers and rapists, get released daily on bail. Nothing I did was illegal,” Forchion has stated from jail. “Nothing I did was wrong. In fact, I actually thought I was in accordance with the law per the advice of my attorney.” (Forchion’s attorney has since been removed from the case per his own request.)

Forchion’s long standing battle for marijuana law reform has been documented for over two decades. Considered by many as the “grandfather of marijuana reform in New Jersey,” Forchion is a bone cancer patient who states he needs marijuana for his symptoms. Forchion’s most recent travails with the Trenton Police Department have shined an international media spotlight on the state’s current cannabis policy. Forchion contends he is political prisoner due to the “politics of pot Jersey style.”

Amongst his many trials and tribulations over the years, Forchion pleaded guilty in 2000 to charges of conspiracy to distribute and marijuana possession and was released on parole after serving 18 months on a reduced sentence. He was arrested again in Burlington County, N.J., in 2010 on marijuana possession and distribution charges. He has fought those charges. Forchion argued his medical condition gave him a “medical necessity” defense to possess and appealed the decision to the NJ Supreme Court and the U.S. Supreme Court.

Forchion achieved Hollywood notoriety when he opened a marijuana dispensary in Los Angeles in 2008, saying it was a temple that used marijuana as part of its religious ceremonies. The California temple was shut down after a federal drug raid in 2011.

Currently Forchion, a Rastafarian, is the co-owner of New Jersey’s only cannabis-themed restaurant, NJWeedman’s Joint and a spiritual sanctuary, Liberty Bell Temple III, located directly across from New Jersey’s Trenton City Hall. He opened the businesses, alongside his partner, medical marijuana mom activist and registered nurse, Debi Madaio. The restaurant and sanctuary receive not only a steady stream of customers but also worldwide media attention.

Witness the most recent court proceedings at https://www.youtube.com/watch?v=NJexiSU0SFE and check for Debi Madaio’s interview about the matter on New York’s PIX11 at http://pix11.com/2017/06/19/nj-nurse-with-adopted-son-who-suffers-from-seizures-calls-for-less-strict-marijuana-laws/ .

This press release was issued on behalf of the news source, who is solely responsible for its accuracy, by Send2Press Newswire. To view the original story, visit: https://www.send2press.com/wire/new-jersey-political-prisoner-nj-weedman-does-hunger-strike-for-bail-from-mercer-county-jail/