LOS ANGELES, Calif. /California Newswire/ — Law enforcement has said marijuana leads to hard things. Pastor Craig X Rubin, candidate for L.A.’s mayor race, agrees, “Barack Obama wrote that he smoked marijuana. The Super Bowl MVP smoked pot, the greatest Olympian of all time, the world’s highest paid actor and some of the world’s top educators have all smoked grass, so by looking at these results one can conclude that marijuana does lead to harder things….like a leadership position in your chosen field.” Rubin is joking of course, but in every joke is a grain of truth. People who smoke pot move onto harder jobs with more responsibilities and that is what Rubin is hoping for. The next job he is looking for is leader of Los Angeles. No less than Mayor. 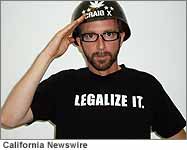 Voters in California passed a law that allowed the medical use of marijuana for patients that can benefit from the herb. However Cannabis Sativa (marijuana) is listed as a ‘Schedule I’ drug meaning that the government considers it more dangerous than cocaine or heroin, which both can be prescribed by a doctor. Federal law says marijuana can’t be prescribed for any purpose because it is so dangerous and addictive it is even not safe for doctors to prescribe to the terminally ill. Yet, the federal government grows it for a few patients.

The California law is written to allow doctors to “recommend” the use of cannabis for medical purposes without writing a prescription. Marijuana can’t be prescribed as it is not a prescription medicine produced by a drug company; it is plant that is grown naturally and then dried. Patients smoke the dried female flowers of the Cannabis Sativa or Cannabis Indica species.

Rubin has set some big goals, “When I am mayor of Los Angeles we are going to end hemp prohibition and tax and regulate medical marijuana cultivation. We need jobs and marijuana as an agricultural crop represents billions of dollars for the City and millions of jobs.”

Rubin, probably the most well-known challenger is counting on Villaraigosa’s continued downward spiral in the polls. The once popular mayor started out with an approval rating above 70 percent when he took office and has since seen it slide into the George Bush territory.

Villaraigosa has failed to debate Rubin or any of the candidates challenging him. A staffer said, “Why debate Lyndon LaRouche?”

Recent internal polls from the campaign show that Pastor Craig Rubin and a trial attorney may actually beat Mayor Villaraigosa. Those two candidates have the highest name recognition and the least negatives. It is quite possible that they’ll then face each other in a run-off. It is unlikely any candidate will receive greater than fifty percent of the vote, therefore the final vote for mayor will be in May.

People within the attorney’s camp have complained in blogs about the amount of press that candidate Pastor Craig X Rubin is receiving saying, “Do we need to be convicted of a felony to get any press?”

Rubin attributes the Mayor’s slide in the polls to his cozy relations with the DWP. The mayor took a trip to Israel with over twenty staffers on the DWP’s dime; last Tuesday the Mayor led the Council in transferring $194 million from the DWP’s “surplus” to the City’s General Fund. Finally, the Mayor is assisting in ramming down the throats of Angelinos a measure that could increase the cost of power to twenty times higher than current rates, says Rubin.

“There are 280 mega watts of solar power produced in the State of California at a cost of $.45 per kilowatt hour,” said DWP GM David Nahai at a local meeting sponsored by South Robertson Neighborhood Council. According to Nahai the DWP currently receives electricity from American produced coal for $.02 a kilowatt hour. The proposal is for the City, through Measure B, to suddenly produce 400 megawatts of solar power with a proposed cost of $3,000,000,000.00.

Rubin riles over Measure B, “We all know who is going to pay; taxpayers. This is a hidden tax on L.A. citizens giving the mayor unlimited power to raise taxes. This was rushed onto the ballot by a lobbyist with a financial interest. The measure could be written better and voted on in six months. Why rush? It is like the Bailout of Wall Street.”