LOS ANGELES, Calif. /California Newswire/ — Millions of Americas are currently unemployed with hundreds of thousands being added to the unemployment roles monthly. Michael Phelps is obviously not unemployed, but he has been fired by Kellogg’s as their spokesman. Pastor Craig X Rubin, candidate for mayor in the City of Los Angeles, is calling for an international boycott of all Kellogg’s products as a result of his firing. Rubin explains, “I have seven children and they support me 100 percent. If stoners globally band together to help Michael Phelps Kellogg’s will be pressured within weeks to hire him again. That is the power of cooperation.” 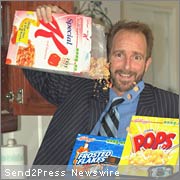 W.K. Kellogg made unprecedented moves as the United States sank into the Great Depression of the 1930s. Instead of cutting back on advertising Kellogg doubled his advertising budget spending and gaining market share. 75 years ago Kellogg responded to the financial crisis by reducing hours of the three plant shifts and creating a fourth shift; spreading payroll among more workers.

Today as the economy worsens Kellogg’s is setting a horrible example by firing Phelps. Children can understand discrimination. All across America parents are taken from children only because their parents smoke marijuana. People are kept from receiving college loans, kept from jobs or discriminated in other ways because they chose to use cannabis for personal reasons such as recreation, health or for spiritual matters.

Craig Rubin feels if the “420 Nation” can’t pressure Kellogg’s, a company making tons of money off of stoners-with-the-munchies, to re-hire Phelps then the cannabis movement has no hope of ending prohibition soon. This is a test. If they can fire Michael Phelps, an American hero, for a photo; no one’s job is safe. Rubin feels if everyone who supports ending marijuana prohibition stops buying Kellogg’s it will send a huge financial message to corporate America. Most polls overwhelmingly show Americans support the ending of the prohibition of marijuana and it would create millions of jobs. It was the number one question of President Obama on “question.gov.”

Craig Rubin who ran a medical marijuana church after appearing on Showtime’s “Weeds” was arrested and convicted of marijuana possession and aiding in abetting in distribution of cannabis. Currently, he is prevented from leaving L.A. County and must call into probation on a nightly basis to see if he will be randomly drug tested in the morning. Rubin says the system can be abused, “I got in an argument with my brother and he called Child Protective Services on my family saying my children were being abused because I smoked pot. My family was evaluated for 30 days and the children were left at home; thank God. However, if I didn’t have a note from a doctor allowing me to smoke medical pot my children would have been taken from me.”

Rubin believes that marijuana can save thousands of homeowners from losing their homes to foreclosure. MSNBC said, “$400 invested can produce a pound of pot that sells for $6,000.”

For Kellogg’s to fire Michael Phelps over a photo is outrageous. This fine young American proves once and for all that top athletes who spend years caring for their body prefer marijuana to alcohol. When San Fernando Valley resident Nat Dikes heard that Phelps had been suspended from swimming for 90 days as a result of pot use he said, “Is pot performance enhancing too? I think they are just jealous because they can’t swim as fast as him. Are they afraid kids will smoke pot to win gold medals at the Olympics?”

Kellogg products are sold in more than 180 countries worldwide therefore Craig Rubin is calling for a global boycott of all products. “If you want to end the global cannabis prohibitions don’t buy this company’s products. Working together we’ll win our freedom,” says Rubin.