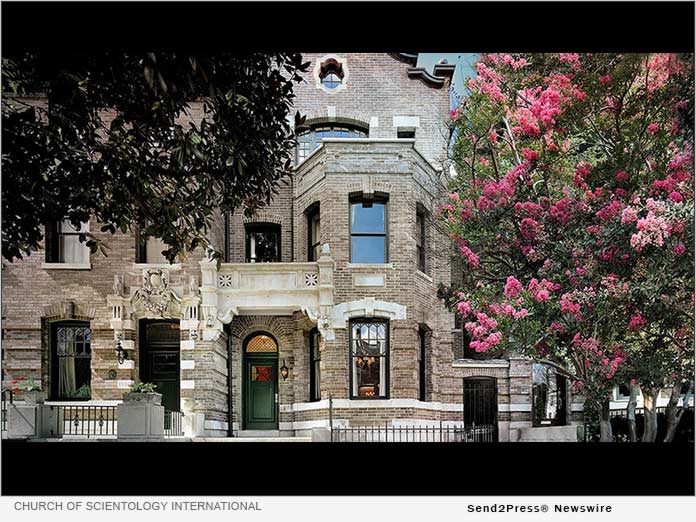 Located at 1812 19th St NW, just over a mile from the White House, it was from his office on the second floor that Mr. Hubbard served as Executive Director and coordinated its activities and churches on five continents.

In dedicating the Church of Scientology National Affairs Office in Washington, D.C. in 2012, Mr. David Miscavige, ecclesiastical leader of the Scientology religion, highlighted “freedom” as essential element in Scientology Scripture and made it clear that Mr. Hubbard selected that date and location for inaugurating the new international headquarters quite deliberately. “Just as this nation was founded upon the principles of Life, Liberty and the pursuit of Happiness, so too those principles are woven into the very fabric of our Scripture,” he said.

Mr. Miscavige pointed out that the ideals enshrined in the Declaration of Independence, whose adoption is celebrated on Independence Day, are incorporated in the Creed of the Church of Scientology, published in 1954. The Creed affirms:

That all men of whatever race, color or creed were created with equal rights.

That all men have inalienable rights to their own religious practices and their performance.

That all men have inalienable rights to their own defense.

That all men have inalienable rights to conceive, choose, assist or support their own organizations, churches and governments.

That all men have inalienable rights to think freely, to talk freely, to write freely their own opinions and to counter or utter or write upon the opinions of others.

And that no agency less than God has the power to suspend or set aside these rights, overtly or covertly.

The full text of the Creed is available in a video on the Scientology Network, as is a three-part series chronicling in Mr. Hubbard’s own voice, his life and discoveries.

In an essay published in August 1954, L. Ron Hubbard wrote:

“We are extending to you the precious gift of freedom and immortality-factually, honestly.

“You are a spirit. You are your own soul. You are not mortal. You can be free.”

In that same essay, he credits America with having “kept wide the doorway” for this accomplishment “by retaining religious freedom.”