LOS ANGELES, Calif. /California Newswire/ — This isn’t your normal church bake sale, more like “Baked Sale.” Temple420.org tries a unique membership drive method. Hoping that people would gravitate towards their message of hope in the End Times and join the organization less than 100 people subscribed to their YouTube channel. The for-profit church has yet to sell many NFTs as hoped. Now, they are trying gifting cannabis to new members. 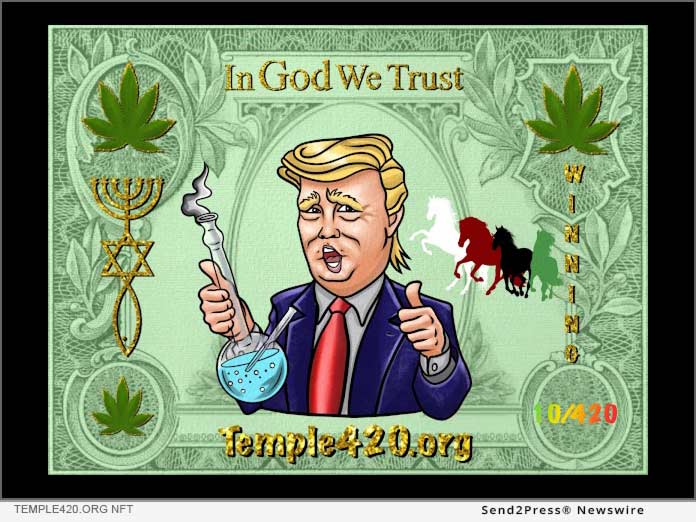 “Our Membership NFTs are on the ETH (Ethereum) ledger, the one the SEC has already pronounced is not a security unlike XRP, so the price of ETH to the US Dollar went up so quickly that our NFT prices were crazy high and that is not because we are a cannabis church,” the congregation’s leader Pastor Craig X Rubin said jokingly.

“We decided to lower the cost to $100 for one of our NFTs and to add more value we’re including 10 individually packed ounces of cannabis hemp with the $100 membership. The retail price is $200 on the hemp alone, plus you get an NFT, the hottest digital asset on the market, so we think joining our congregation is a great idea and a good deal! Even if you resell the NFT you keep the hemp.”

There are three levels of membership for the church each that comes with a different NFT image and a higher reward of cannabis to the new member. A simple search on YouTube will show many videos of church members burning cannabis in a prayerful ceremony like Native America smudging. The church leader says he learned to use cannabis in a medicinal and spiritual way from Havasupai Elder, Roland Manakaja, featured in High Times magazine, pop culture songs, books and spiritual videos.

With only two weeks left in Temple 420’s seven weeks ministry they have decided to step up their game by making their NFT offer that comes with membership include the very sacrament they are burning online. Each day the Bible class starts with a prayer and the burning of cannabis hemp. “We are on Rumble and YouTube with our online non-traditional ministry teaching people not to hate each other whether or not they smoke cannabis. Although we think cannabis helps people get along and a bong.”

The Pastor goes on to describe a few of his unique sermons. For example, in one ‘service’ there were two people dressed in street clothes drinking watching the news, “One night Mario and I drank a beer recording ourselves with 3 camera and lights watching the news like everyday Americans, however, we stopped and pointed out how both CNN and Fox News Corp have the same top investors and those investors are paying to divide us, everyday Americans. Meanwhile, God’s love doesn’t distinguish between the vaccinated and unvaccinated and neither do we. God doesn’t distinguish between the races. In his eyes, He created the human race and that is what we teach.”

The church believes the media is being used as propaganda against the American people to divide them. Whether it is late night entertainers like John Oliver claiming that natural immunity doesn’t exist or Stephen Colbert doing a song and dance with needles promoting the mandates there seems to be a myriad of examples that support their belief. “News anchors and politicians have become salespeople for the pharmaceutical industry,” claims the Pastor. “In the Book of Revelation Jesus wared against people using ‘pharmakea’ (where the modern word pharmacy comes from) to control the masses (Rev 18:23).” The church uses humor and videos clips to make their points in their videos.

Temple 420 tries to prove that the first two seals of Revelation have been opened and to prepare their followers for the Third Seal, The Rider on the Black Horse. Temple 420 says this seal brings judgement to the world with famine and inflation. In another episode “the Cholo and the White Guy,” the two Bible teachers, sans beer, explain how crypto currency has helped them to beat rising prices. They also show samples of silver and gold. The show is mix between the spiritual and the financial with Temple 420 telling their followers to prepare for the Biblical Apocalypse by diversifying their assets. Hemp is an asset followers should have because it is food, fuel, fiber, medicine and the center of a spiritual life, so the church is giving 1,500 pounds to members that join by purchasing an NFT.

Mario Perez, operations director and editor of videos for Temple 420 says, “We bought the cannabis and designed the NFTs to get people excited about joining the Temple. This crazy low price for an NFT is more than reasonable, and we think it will only rise. The most expensive NFT is $420 and comes with two pounds of premium California organic hemp and 30 minutes of Biblical counseling from Pastor Craig X.”


Episode 37 Two average Americans drinking beer watching the news and bringing peace to the world.
Watch this video on YouTube.